The Lincoln Park Police Department was formed by Municipal Ordinance on July 10, 1922. The first Chief of Police was Elmer Watt. Chief Watt was a stern no nonsense Chief who served Lincoln Park until 1955, when his successor Chief Robert Van Zant became Chief of Police. 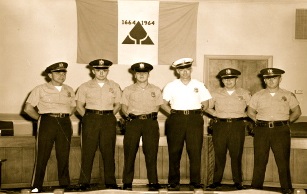 Robert Van Zant and George Scherer served as Chiefs of Police during these decades. Officer that were hired included:
In 1981, Chief Michael Nowacki took over as head of the department and was followed by Chief William Karback in 1988.
Officers who joined the department in the 80's:
In 1992, John Gibbons became Chief of Police and served until Kenneth West Became Chief in 1995. Officers who joined the department in the 90's:
John Cifelli became Chief of Police in 2002. He was succeeded in 2005 by Sean Canning. Chief Canning was replaced in 2010 by Thomas Andrascik. Chief Andrascik was then replaced by Warren Eric Sundberg in 2011. Mark West became Chief of Police in 2012 and held the position until Chief Michael Runfeldt took over operations of the Department January, 2017 which was succeeded by Chief Anthony Simone in March 2018.
Officers hired since 2000 include: